AFM experiments can be performed in a controlled relative humidity and temperature environment, allowing for the capability to study the hygroscopicity, surface tension, and phase states of substrate-deposited particles and nanometer-sized droplets. Particles with chemical compositions relevant to sea spray aerosol (salt, organic acids, and saccharides) are of interest. The goal of these studies is to understand the role of single particle aerosol in the world we live in. 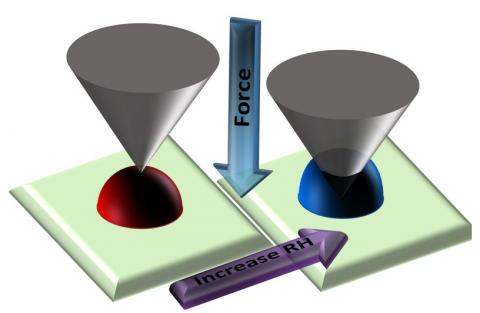 Currently, the impact of various phase states of aerosols on the climate is not well understood, especially for submicrometer sized aerosol particles that typically have extended lifetime in the atmosphere. This is largely due to the inherent size limitations present in current experimental techniques that aim to directly assess the phase states of fine aerosol particles. Herein we present a technique that uses atomic force microscopy to probe directly for the phase states of individual, submicrometer particles by using nanoindentation and nano-Wilhelmy methodologies as a function of relative humidity (RH) and ambient temperature conditions. When using these methodologies for substrate deposited individual sucrose particles, Young’s modulus and surface tension can be quantified as a function of RH. We show that the force profiles collected to measure Young’s modulus and surface tension can also provide both qualitative and quantitative assessments of phase states that accompany solid, semisolid, and liquid particle phases. Specifically, we introduce direct measurements of relative indentation depth and viscoelastic response distance on a single particle basis at a given applied force to quantitatively probe for the phase state as a function of RH and corresponding viscosity. Thus, we show that the three phase states and phase state transitions of sucrose can be identified and ultimately propose that this technique may also be used to study other atmospherically relevant systems. 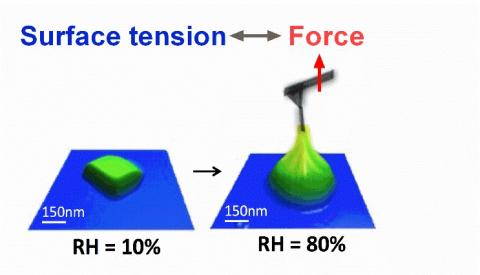 Surface tension, an important property of liquids, is easily measured for bulk samples. However, for droplets smaller than one micron in size, there are currently no reported measurements. In this study, atomic force microscopy (AFM) and force spectroscopy have been utilized to measure surface tension of individual submicron sized droplets at ambient pressure and controlled relative humidity (RH). Since the surface tension of atmospheric aerosols is a key factor in understanding aerosol climate effects, three atmospherically relevant systems (NaCl, malonic and glutaric acids) were studied. Single particle AFM measurements were successfully implemented in measuring the surface tension of deliquesced particles on the order of 200 to 500 nm in diameter. Deliquesced particles continuously uptake water at high RH, which changes the concentration and surface tension of the droplets. Therefore, surface tension as a function of RH was measured. AFM based surface tension measurements are close to predicted values based on bulk measurements and activities of these three chemical systems. Non-ideal behaviour in concentrated organic acid droplets is thought to be important and the reason for differences observed between bulk solution predictions and AFM data. Consequently, these measurements are crucial in order to improve atmospheric climate models as direct measurements hitherto have been previously inaccessible due to instrument limitations.

Soft porous crystals such as metal-organic frameworks (MOFs) offer intrinsic flexibility and dynamic gas sorption properties, distinguishing them from conventional porous solids for energy storage applications. AFM nanoindentation is employed to characterize the mechanical properties of a variety of MOFs to elucidate fundamental structure-property relationships which govern the observed dynamic behaviors. The goal of these studies is to develop rational design strategies to impart highly unique mechanical and gas storage properties to MOFs.

Size engineering is an emerging strategy to modulate the mechanical properties of crystalline materials. Herein, micro- and nanodimensional single crystals of the prototypical metal–organic framework (MOF) ZIF-8 are generated using solvothermal and solution methods, respectively. Atomic force microscopy-based nanoindentation technique was used to measure the Young’s modulus values of micro- and nanodimensional individual ZIF-8 crystals. We demonstrate that crystal downsizing to nanoscale dimensions results in a 40% reduction in crystal stiffness. The change is attributed to a greater contribution of surface effects to the physical properties of nanocrystalline ZIF-8. The observed change in the mechanical properties may be used to explain reported size-dependent changes in gas adsorption of ZIF-8, thought to be a result of differences in framework flexibility at the nanoscale. Our work provides an important example on how downsizing of crystalline metal–organic materials can give rise to specific and tunable physical properties.

AFM nanoindentation method is employed to quantify the mechanical properties of millimeter and sub-micrometer sized organic organic cocrystals, capable of undergoing single crystal-to-crystal (SCSC) reaction in solid state. The effect of photoreaction on mechanical properties is studied for a variety of solids with the main goal to design advanced material with defined stiffness for device application.

A correlation between Young’s modulus, as determined by using nanoindentation atomic force microscopy (AFM), and atomic polarizability is observed for members of a series of cocrystals based on systematic changes to one cocrystal component. Time domain spectroscopy over terahertz frequencies (THz-TDS) is used for the first time to directly measure the polarizability of macro- and nanosized organic solids. Cocrystals of both macro- and nanodimensions with highly polarizable atoms result in softer solids and correspondingly higher polarizabilities.

Conductive Probe Atomic Force Microscopy (CP-AFM) is utilized to study electrical properties of organic materials at the nanoscale level. The approach uniquely offers spatially resolved (nm) measurements of electrical current (pA) with outstanding control of applied forces (pN).  The goal of these studies is to develop fundamental understanding of factors that control electrical conduction at the nanoscale, potentially leading to development of novel molecular devices.

Molecular Recognition Force Microscopy (MRFM) is used to study the forces required to rupture the bond between enzyme and an inhibitor. The ability of AFM to resolve forces with pN resolution allows quantification of interactions between other cofactors, as well as study enzyme dynamics.  The goal of these studies is to develop a technique to reliably study enzyme dynamics on a single molecule.

Escherichia coli dihydrofolate reductase (ecDHFR) has one surface cysteine, C152, located opposite and distal to the active site. Here, we show that the enzyme spontaneously assembles on an ultraflat gold surface as a homogeneous, covalently bound monolayer. Surprisingly, the activity of the gold-immobilized ecDHFR as measured by radiographic analysis was found to be similar to that of the free enzyme in solution. Molecular recognition force spectroscopy was used to study the dissociation forces involved in the rupture of AFM probe-tethered methotrexate (MTX, a tight-binding inhibitor of DHFR) from the gold-immobilized enzyme. Treatment of the ecDHFR monolayer with free MTX diminished the interaction of the functionalized tip with the surface, suggesting that the interaction was indeed active-site specific. These findings demonstrate the viability of a simple and direct enzymatic surface-functionalization without the use of spacers, thus, opening the door to further applications in the area of biomacromolecular force spectroscopy.